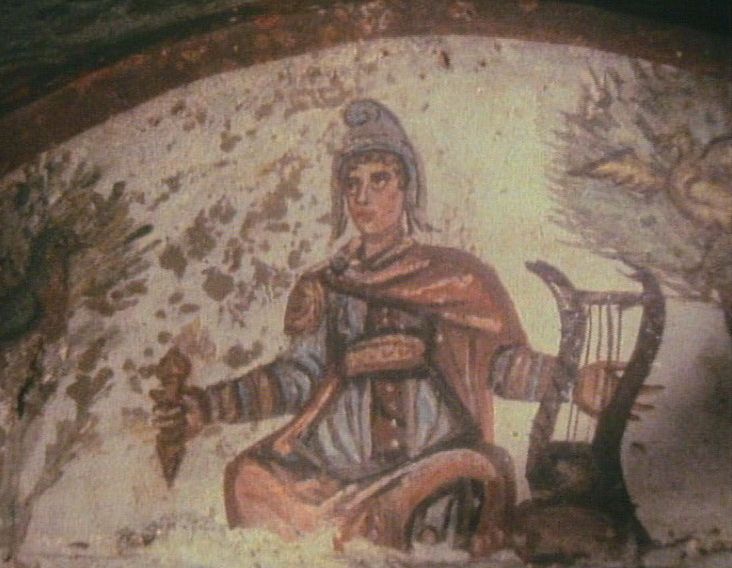 The catacombs originated in the area of Rome in the first half of the second century outside Aurelius’ walls. They were private property, usually of some families or funeral communities. The origin of the name itself comes from the toponym "under the cavity" and was used to indicate topographical depression between two hills. Since the middle of the third century, this term has been used for "Christian cemeteries".

The catacombs were not only used for burial, but also for performing liturgies, especially those related to the cult of martyrs. During the reign of Emperor Nero in 64 AD, half the city burned down, and the Christian community was blamed. So began their persecution, and early Christians during the greatest persecutions of the refuge were found in the catacombs. According to Roman law, burial sites were sacred (sacrosanct) and there the Romans rarely persecuted.

So let’s peek together at the inside of this uniting treasure of Christian archaeological heritage.

The first thing we're going to encounter is a staircase, it can be up to 12 meters underground, and at the bottom of it are corridors that are forged in numerous directions. They are most commonly 3-4km long, and only so wide that two undertakers carrying coffins carrying the deceased could miss each other.

The walls of these narrow corridors were filled with niches, cavities in the walls that housed the bodies The graves in the catacombs were in the form of niches in the wall with sarcophagus, then square niches "locu" closed vertical slab as well as larger niches "arcosolia" with the grave site at the bottom, closed horizontal plate.

Originally, terracotta plates were zipped and closed with lime and later marble slabs. On them was a carved epigram or the simple name of the deceased, and in many cases, given the great illiteracy of the time, and the early Christian symbols then understood only devotees of the new Christian faith. Thus gradually forged the authentic Christian iconography:

• The Circle: The Heavens

• Shepherds with sheep on their backs= "good shepherd"

• Dove=symbol of the holy spirit

• Pigeon with an olive branch = symbol

The graves of martyrs, as well as "arkolia", were also depicted by the technique of the fresco. In the beginning, were simple compositions that later became cycles with scenes from the Old Testament and New Testament which look in front of our eyes like a miniature Gospel, and to this day they are very alive and impressive. I'd like to give special attention to the third-century fresco on the wall of The Scriptures of St. Cecilia in the catacombs of San Calisto, where it was shown for the first time “ Christ the Pantocrator”

It is important to note that both pagan traditions and superstitions have found their place in early Christians, so items such as toys, coins, objects from the ivory, bells, silver and gold foils, and lamps, as well as dishes for food and drink. The deceased was buried necked after a ritual bath wrapped in a white canvas.

Common to all, including Christians, was the close bond and compassion that was created over the tomb of the deceased. In this way, we are encouraged to do so not only out of feelings for the willing deceased person, as well as the care and need to defend it (e.g. from evil spirits) but also from deep belief. to the continuity of life after death, i.e. in the Resurrection. Although above all, catacombs are an indefensible archaeological treasure for the history of Christianity, the history of mankind and art in general, and the general human aspect of observation on catacombs.

Because of that, I need to share with all of you the words that have made a great impression on me at the time. They were written in a diary by archaeologist Carter, the founder of Tutankhamun's tomb, trying to describe his own emotions now of the first encounter with the tomb of the famous Pharaoh:

“What created the strongest impression in the middle of all this overshadowing wealth was the wreath of flowers placed on the coffin by a young widow; View of that wreath make the man's heart tear apart. Preserved traces of its former fresh colors reminded us eloquently of how the strength and size of love even Eons are just a moment.”