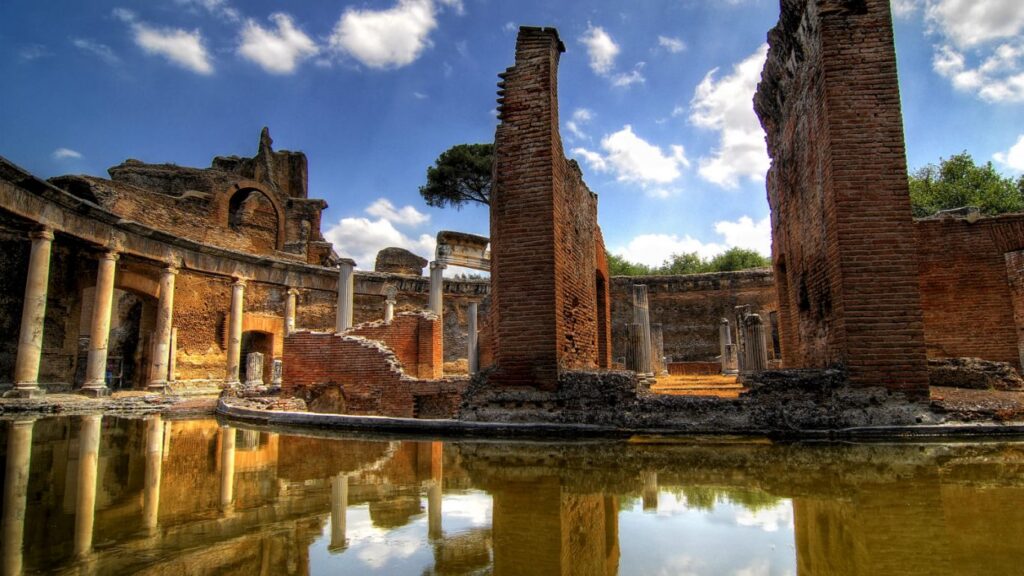 Hadrian’s Villa is a site of exceptional beauty, art and magical spring water.

It was a perfect retreat for the Emperor Hadrian from the Palatine hills, hence the name Hadrian's Villa.

Some say he hated Palatine hills palace so he was compelled to make his own in the suburbs of Rome.

A resort, filled with many wonders, made for one of the oldest Emperors of The Roman Empire who has brought different cultures from his many voyages and threaded his experiences through the entire estate. This breath taking complex was built on the existing villa that belonged to the Emperor Hadrian’s wife. Her name was Vibia Sabina and she was the Emperor Trajan’s niece, who in fact, took Hadrian under his wing when he lost his parents.

I can surely say that this property can be compared to the most expensive estates today and its magic is still, after so many centuries, incomparable.

Lavish escape villa lies on a square kilometer, if not more. It contains 30 buildings, including pools, baths, fountains, landscaped gardens, farms and some parts are untouched so there is a rich wild life as well. 4 aqueducts of Rome Anio Vetus, Anio Nobus, Aqua Marcia, and Aqua Claudia are located on the estate.

On his many voyages, Emperor Hadrian was impressed with a very rich city of Canopus in Egypt and a temple of Serapeum made for Greco-Egyptian deity Serapis so he has used as inspiration and implemented it into the highlights of the villa, the magnificent reflection pool and artificial grotto.

Canopus pool is representing a part of a Nile river with the grotto on its end. The pool was surrounded by Corinthian columns and statues from Severus, Ares, Athena, Hermes era. Today the original statues remain in a museum while replicas are showing us how it was in the height of its glory.

The Serapeum is standing on the very end of the pool and it has a beautiful dome which Emperor Hadrian is famous for, he made Pantheons dome after all. The porch is embellished with niches, fountains and waterworks.  Scholars say that it contained tunnel vaults also known as barrel vaults rooms. These rooms were decorated with marble but the Emperor had to show off his power and wealth so he ordered the most modern thing at the time, which was “opus sectile” – a picture/mosaic made out of many pieces of pearls and colored glass. Archeologist found a kitchen there so the pool, terrace, the pavilions draw us to the conclusion that this part of the villa was used for summer parties. This magnificent Villa will take you through art and old world splendor. Its many artifacts and artworks are scattered trough out the world but the replicas of statues, theater scenes mosaics, vases, life size sculptures including of Hadrian’s deified lover Antinous who has accidentally drowned in Egypt, also the waterfalls, spring water, scent of plaints and herbs in the air will make you feel it’s magic.If you like this tale perhaps you may enjoy another
Tags:#ancientrome#explore#holiday#holidays #vacation #travelling #instatravel #photography #lovechallenge #naturephotography #visititaly #rometourofficial #visitrometour#italian_trips#italy #pompei #unescoworldheritage #visititalyofficial #visititalytour#romeitaly#romephotography#tourism#travel#traveladdict#travelblogger #traveller#traveler#travelgram#travelphotography#traveltheworld#vacation#wanderlustAdventureBeachLifestyle