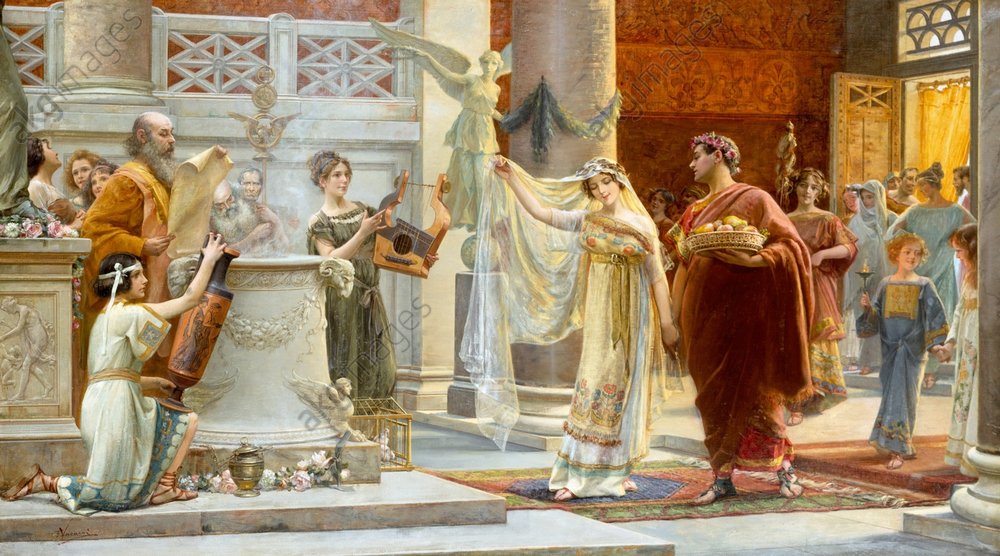 Believe it or not, these are factual evidence about marriage, adultery, divorce and of course, mistresses.

Wedding-Ring Father of the house of any class had a power to propose marriage to his daughter and let her meet with potential future husband by according to the law, however, if the future bride dislike the man and found proof that he isn’t marriage material, she could refuse the union.

Young ladies from the upper classes didn’t have so much of a choice when it comes to choosing their spouse as middle and lower classes ladies, because the father would choose the most respectful, but also the richest eligible bachelor. It was more of a business, property, and connections expansion.

It was expected that the bride is older than 12 years old, that she was a virgin and that she had a dowry.

If a young lady agreed or had no proof against the future husband, she would start with her wedding preparations. Bride to would be obliged to make a woollen white dress and yellow, transparent fabric that would cover her head. Some records show that bride would have a flower crown and embroidered wedding dress she made with Knot of Hercules which was a  belt loosely placed on her waistline.

Brides’ family would prepare their gifts/dowry for the new in-laws. For lower classes it is a symbolic gift of cloths, piece of furniture, mirrors, jewellery , the higher classes would give a piece of land and even slaves. Romans invented prenuptial agreement since they would make a contract before the wedding, In case the husband or any member of his family abused his daughter in any shape or form, the dowry would be returned either to the father or to the bride.

Bride that accepted the groom would hand over to her family’s guardian Lares her childhood possessions (toys for example) and pray in the last night before her entering the adulthood.

After all preparations for the wedding party was complete, the elders choose a good date,From the very brake of dawn, they would watch for omens, bad luck signs followed by a blood sacrifice, usually it was a pork.

By tradition, the “torch of Ceres” was lit in the fireplace of both family’s home and the processions would commence. When the bride and her family arrived in the groom’s neighbourhood, she would give a copper coin to their Lares as a sign of acceptance and confirmation of her moving to his husband’s home. Finally, the tradition says that the groom would greet bride and her procession with his houses torch lit in his sacred house fire and a bowl of water, saying: “Aquae et ignis communicatio” which means "I given you water and fire".

After this moment, female members of the bride’s family would carry the bride inside the groom’s house so she wouldn’t stumble (it was a bad sign) and the bride would ask: “Ubi tu Gaius, ego Gaia” which means:” Where are you Gaius, here is Gaia.” Groom would also say this in reverse and the sacrifice was offered to Mother Earth. When the bride and the groom signed the prenup, the wedding ceremony is completed, and they’ve become newlyweds. The wedding party begins.

At some point that night, bride would’ve been taken by her husband to condominium, or the bedroom where no one was permitted to enter (not even slaves) for a marriage consummation.

Next day husband would be obliged to have a dinner party for his new wife since she needed to give offerings to his house Gods.

Not all marriages end happily ever after,and in Ancient Rome the legal divorce was possible and executed by law.

By Ancient Roman law dating as far as 230 BC  the marriage can be dissolved for adultery, insanity, vice and bad character in both men and women. Perfect example of that law being executed was a first recoded case of divorce ever. It was a case of the respected man Spurius Carvilius who wanted to divorce his wife since she couldn’t have children. Court granted his demand and first known legal divorce was made.

Lower classes didn’t go through all that, the wife would simply take her dowry and leave the house of the husband and back to her father’s house.Women were very close to their father’s, and it was expected to be obedient even if it meant to disagree with her husband.

From what we know, divorce was granted only for things such as drunkenness, gamble, adultery and  fraud, but still, there were cases on record that a man divorced his wife because she made a copy of a house key.

Adultery and domestic violence were a crime and punishable by law. Ofended husband,for exemple would’ve had permission to kill the wife’s lover if he was a slave or low-class free man as a satisfactory vengeance. If upper class, scorned man would kill one of his slaves.

Although the marriage was monogamous and no polygamy was allowed by law, Roman men where allowed to have a concubines and they weren’t prostitutes either. They weren’t looked as bad as we look at them now. They were well taken care of by the lover and a man would be obliged to rapport this illegal relationship to authorities so he can enjoy it without being prosecuted. Concubines had children in these relationships, but they were illegitimate and didn’t have any rights on the father’s inheritance.

Roman aristocracy had high remarrying stats because of a high death rate. There were cases where the new wife would be as young if not younger than stepchildren.

There was one more reason why it was recommended to remarry as fast as possible. Physicians considered remarrying important for a woman since they claimed that a sexually depraved lady can get very sick.

Widows were highly encouraged to remarry after their husband dies, especially if a child was produced. She would have to wait 10 months before remarrying in case she became pregnant before her husband died and thus the child’s father was known.