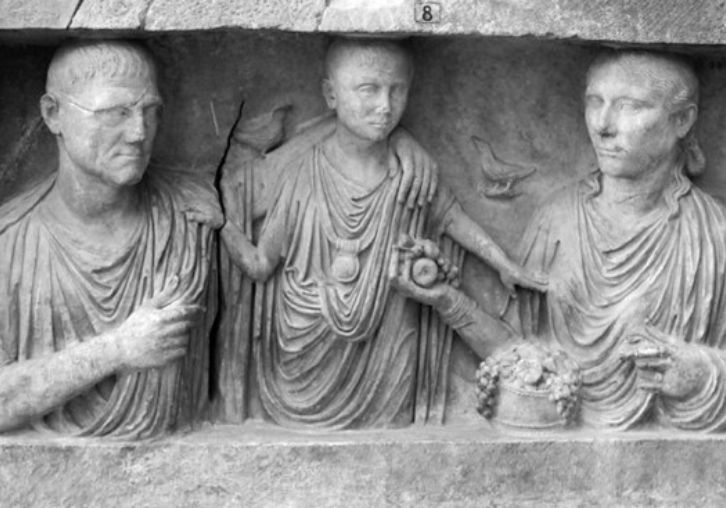 Family...Since I am relaxing by the fireplace in my lovely home, the crackling of the burning wood reminds me of Ancient Roman home, full of vivid colours, decorated so well. A wife of a ” pater familias” was so proud of the party filled with wine and olives and good food, so I am compelled to share some of the stories that I have heard long ago, the stories about the Ancient Roman family.

Main figure of the Ancient Roman Family was a man, usually the oldest male in the family, who was called "pater familias", the head of the house. He was the owner of everything under his household, people, and property alike. Even though today we can’t imagine such a roll of someone having slaves, a man who had all the power over others that were under his roof, this was a proud institution for Ancient Romans.

The head of the house had so much power that they could execute their disobedient children.

Famous among the factual stories found was one of distinguished man called Spurius Cassius Viscellinus. He was consul and first “magister equitum” – master of the horses, who has made the first agrarian law. His own father condemned him publicly and ordered his execution since he found out that his son Spurius was planning on taking over regal power. Once Spirius left his office and came home, his father whipped him in front of all relatives he could’ve gather and finally was taken to be executed. Very unfortunate story…

Then there were his children, legitimate, made in legal marriage and only as such considered heirs. Having an heir was of outmost importance for a man, so he can secure that his bloodline lives on even if  that ment that the man needs to adopt a child from his family, a nephew.  Any child born in the Ancient Roman times wasn’t consedered legitimate until a midwife has put the baby on the ground before fathers’ feet and if he picked the baby up in his arms. In cases thay the family couldn’t afford having another child,  it was rejected by its father. These babies were normaly taken to a specific place where they mostly became slaves.

They say that the father of the house was holding all the power, however mother of the house had very much influence over his decisions. A woman in Ancient Rome   had important role in presentation and managment of the house,and the Roman marige was regulated by the law,so both sposes needed to rispect them. The lady of the house, for exemple needed to be  the embodiment of modesty, grace, dignity, and beauty.

But that is another story…